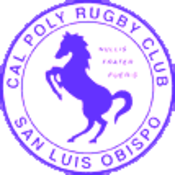 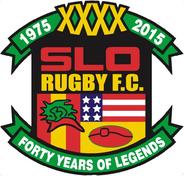 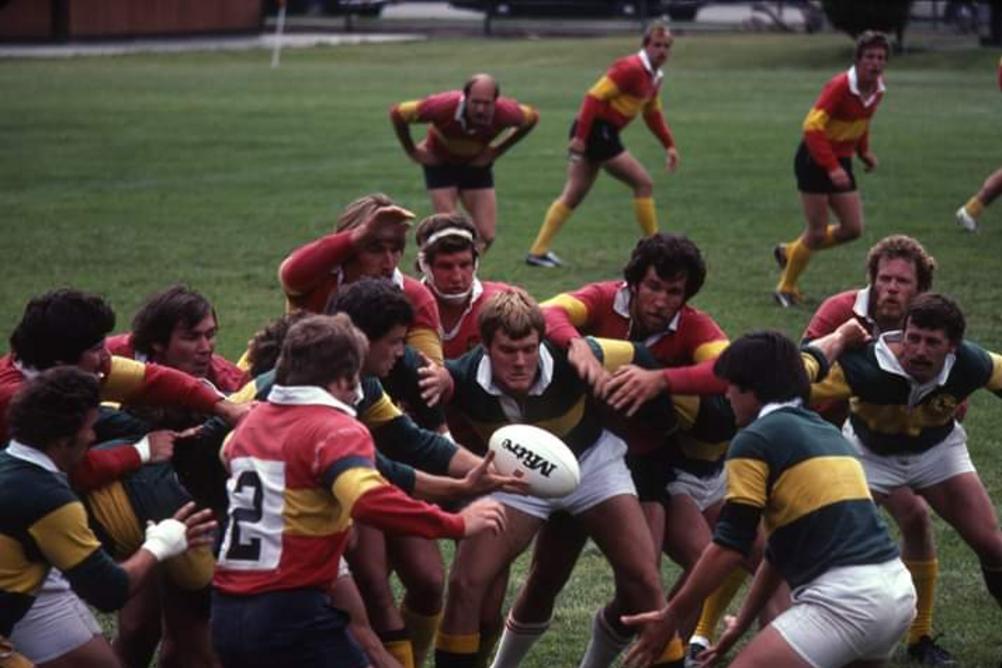 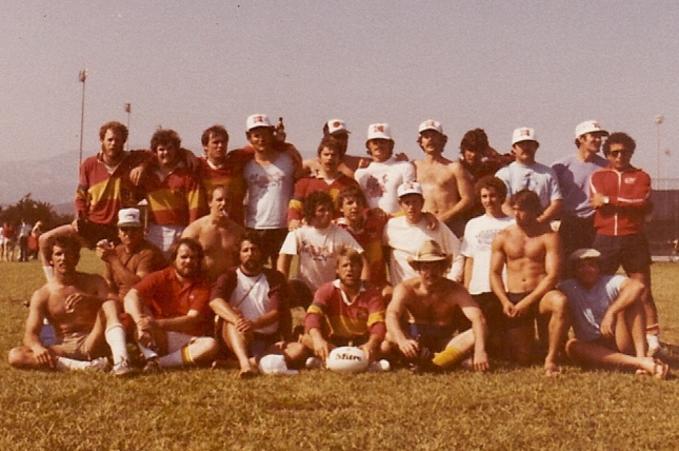 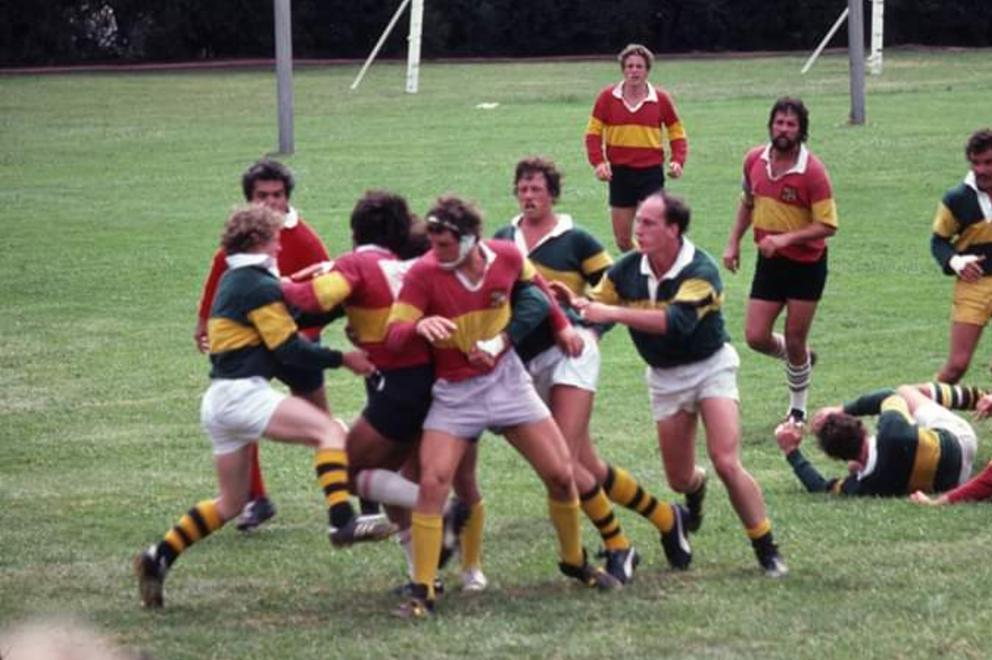 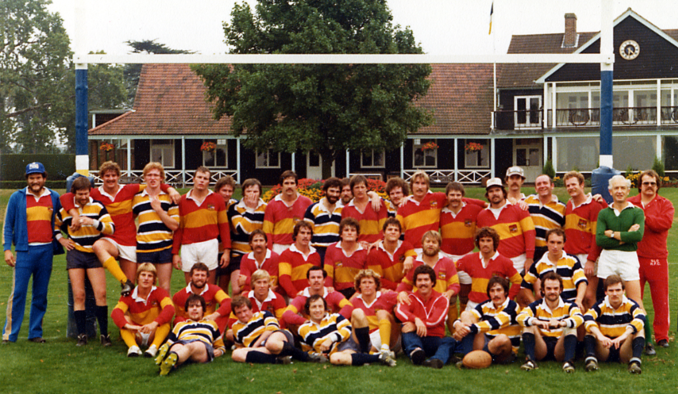 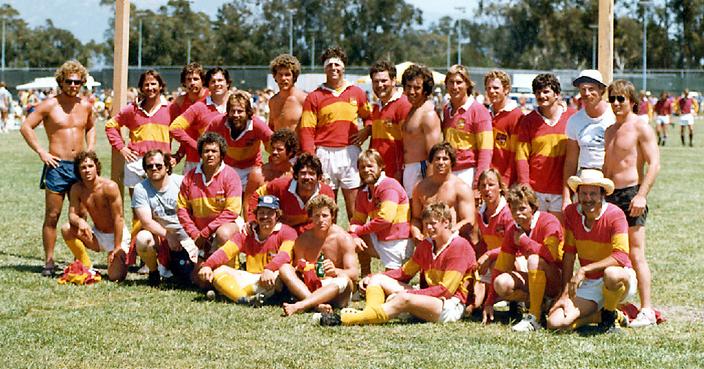 San Luis Obispo RFC was formed in 1966 by a small group of County residents, Dave and Don Sturges, Al Coehlo of Arroyo Grande and Lee Overbeck. In the early years (1967-70) SLORFC was a non-funded, fully chartered club on campus of California Polytechnic State University, San Luis Obispo. The pipeline for the club came from the college’s gridiron football team, which was known for its hustle and aggressiveness. These became the trademarks for the rugby club, and still remain so.

The club nicknamed themselves, "the Grogs" with the reputation of being a hard-hitting, hard-partying club. Vic Rivera was a leader in both categories. After a match against Irvine Coast RFC in 1971, he became the first ever “All Coast Belly Bumping Champion” as he bumped Chunky Butler into submission at the infamous rugby bar in Newport, California, “Blackies-By-The-Sea.” Victor began his career in 1967 as a hooker and has been the filament weaving together the three periods of the club’s history. He was capped in 1979 for 300 1st XV appearances.

In the early 70’s the club enjoyed a period of stability with David Ritchie as coach and team leader. Ritchie had played scrum-half prior to joining SLORFC, at UCLA under the direction of Dennis Storer (coach of the Eagles). Ritchie added a touch of finesse to the club’s other qualities. At the same time, Rivera, Vic Eklund and Phil Kinney ended their gridiron football careers and with 15 other retiring gridironers, moved over to the rugby pitch.

It was 1971; the Grogs had their best season ever. Ritchie was voted MVP at the prestigious Southern California Championship Tournament where the Grogs were the semi-finalists. He was also named to the first-ever Grizzlies (all California) touring side to Canada. That year the Grogs finished 13th at the National Tournament in Pebble Beach, Monterey, Ca.

In 1972, with the addition of other gridironers, including Marc Sindel and Greg Peters, they finished division play in a first place tie, but lost the championship trophy in a mathematical process of elimination. The club now had 40 players.

In 1973, Thom "Dimmolition" Dimmit, the reigning #8 in California, joined the team. Dimmit was on tour in 1970 with the California Universities Tour of Australia, which went 8-1-1 and was the most successful America tour ever. In 1971, he was on the Grizzlies tour to Canada with Ritchie. His vast international experience was immediately felt as SLORFC went 15-5 in 1973, and 16th at Monterey. Dimmit added a new dimension to the rough and tumble style of play that characterized the forwards with an opened style of loose play.  In 1974, many of the “old boys” departed from San Luis Obispo to play elsewhere.

With the departure of Dimmit, Ritchie and others, the 1975 season ended 7-3. Doug “Bubba” Smith stepped in to handle the leadership. Politics, combined with the college’s administration rescinding school funding of a club containing non-students, “drove the boys off the playground and downtown.” The Grogs split.

Several more fine young gridironers came out in 1973 to replace those leaving. Unfortunately, it was a continual learning situation.

Matt Cavanaugh, Tom "Chicks Dig 'Em" Bobrink, and Chuck Bown provided the necessary traditional link for the SLO City Club to start up in 1976. Under the dominant leadership of Rivera, they welded a club together apart from the University. They were hard put to assemble one full side; the club numbered only 18 men. The club’s administration was handled by Rivera. With Matt, Roy Collier and the return of David “Fluff” Rivera, a Southern California Rep side hooker, the 18 rambled around the Southland, sometimes playing back-to-back weekend matches. They were always competitive. With the continuing addition of more poly crossovers like "Mr. Boo" Zanoli, Lin Price, and Bobby "Bolt" Trudeau, and many local boys the likes of "Tall Paul" Richerson, Kurt Block, Max Knupper, and Tim Kennedy, kept the team flowing with talent.  These boys won the Southern California Michelob White Division I Mens Championship in the 80's and were on top for a many years, until many of the "golden age" squad members retired between 1986-89.

The SLO Rugby Men put their energy into developing a youth rugby program to develop a future for their team. At SLO High School, Athletic Director Thom Dimmit, introduced Rugby to his football players after their season as a way to keep the boys fit and have fun. In 1986, SLO Youth Rugby  launched their first season under Head Coach Terry Conner,  Assistant coaches Randy Shimik, and Matt Escobedo, playing HS teams in Northern and Southern California..

These men set the stage for the birth of the "Renaissance" of SLO Rugby in the 90's, winning multiple Division II SCRFU Championships... beating opponents with one sided scores and 30 plus point margins, led to the team's first U.S. NATIONAL ranking of number 10 in the nation in 1995. The "Golden Age" lived on to the next generation of RUGGERS.

Today, Some of those "Renaissance age" players are now proselytizing the righteous game of rugby to a new age of youth athletes..

Many of those youth players have gone on to play at Cal Poly, and other top rugby colleges and some even now wear the red and black on Saturdays representing the "NEW AGE"  of SLO RUGBY players.

The cycle moves forward, and the tradition continues.  "To Us and Those Like Us.... Damn Few Left"

We still hold our ties to Cal Poly and support the Mustang Rugby Program however we can.......... GO POLY!!